Looking for a starter light to kickstart your journey of indoor weed cultivation?

Well, here we’re with Mars Hydro 300W Review, which we found to be a most preferred choice among beginners.

Moreover, this one is also highly recommended by experts who’re growing weed indoor since ages.

Also, we’d like to state that in this Mars Hydro 300W LED Grow Light Review we’ve covered almost everything a beginners should take into consideration before making their final call.

Yeah, that’ll help you in understanding what your plants crave for in reality and what you’re supposed to supplement to them?

However, this one is an ideal beginner’s light so there are few drawbacks in it as well. Yeah, it should be your prior concern regardless of its bright sides because a single deadly loophole in indoor growing could destroy your dreams of fruitful returns.

So, hang on! And read this full review of Mars Hydro 300W LED Grow Light. 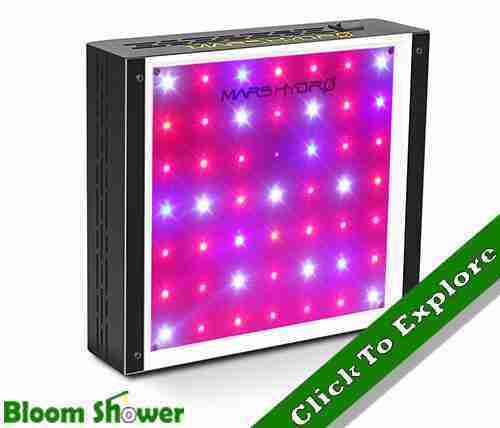 As stated earlier, Mars 300 is a beginner’s light but it is capable of fulfilling your expectations in best possible way.

Also, there are several things that makes it just a “better than other” light and that’s been covered in this review.

But before a detailed discussion on those part; let’s start with the specification which are essential in order to understand its caliber.

Let’s check what it has to serve its users and most importantly to your indoor growing cannabis plants.

Yeah, you heard it right mate. Mars Hydro is a brand that’s been established almost 8-10 years back. In this long journey they’ve succeeded in winning trust and recommendations from thousands of indoor weed cultivators.

Main aim of Mars Hydro is to provide quality packed products at an affordable rates and that’s what helped them the most in their success.

Yeah, by “Quality” we mean it. And, there’s no beating in the bush.

You should check this reviews Mars Hydro 300W LED grow light had got on the amazon. Yeah, that’s more than 1.2K at the time of writing this article and almost 87% people are truly satisfied with the product and its overall performance.

Yeah, we’re going to discuss about it later in this Mars Hydro 300W Review, so don’t worry.

Well, mars hydro 300W LED grow light’s design and build was entirely different few months back and the model we’re reviewing in this article falls under their ECO series.

Wait…Wait..What? Yeah, you read it correctly! In Mars Hydro Updated 300W LED Grow Light there’s no heat sink equipped on the panel. Upon researching for hours we found that they’ve eliminated this part to enhance their product’s caliber concerning power pulling and cooling. And, yeah, they succeeded in achieving the same.

Well, we’re not just saying that they’re succeeded but that’s what being verified by one of our contact who’ve used both models and observed this change. 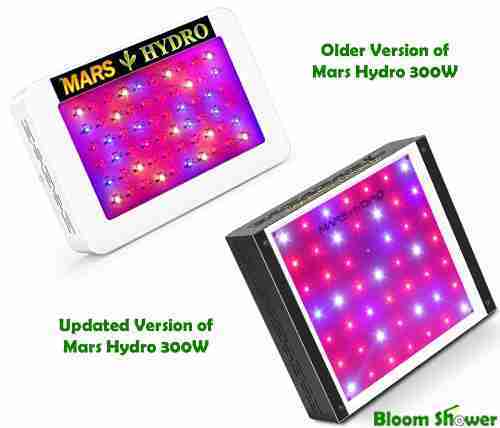 So yeah, all in all, what they’re serving today is far better in performance, durability and efficiency compared to what their previous model was serving a year back. 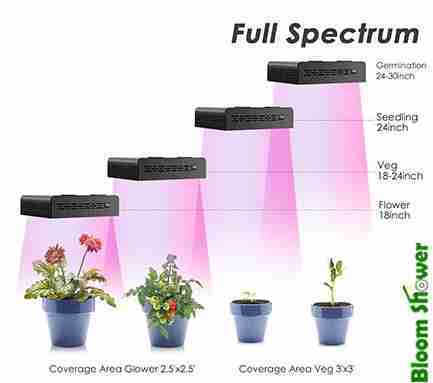 Well, if you don’t know what’s the purpose of IR? Then with help of this Mars Hydro 300W Review we’d like to explain it.

Yeah, it is vital to help your plants sustain better growth as it boosts process of leaf building and cell formation.

Moreover, most vital ratio of RED:Blue is of 5:4 in the mars hydro 300W LED grow light as you can see this in following image. 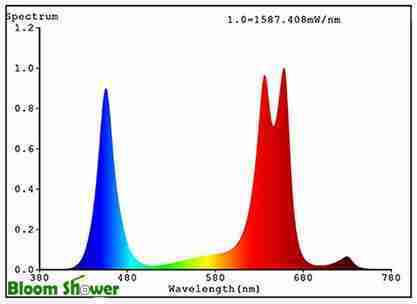 Yeah, almost all vital bands that a normal cannabis plant expect in light are present in it.

Well, that’s a bit of technical lingo and it might be a bit complex to understand for you if you’re coming across these things first time. So, we’ll cut whole story short here.

Basically, a plant’s growth and yield justifies what sort of light was supplied to the plants. So, if we take our survey of around 25 mars 300W users then on average every person got 1 oz yield result from a single LED. Yeah, that’s fabulous.

Usually, an LED at this price tag is expected to cover around 1.5’X1.5’ of grow space at max.

However, Mars Hydro updated 300W LED grow light is capable of covering around 2’X2’ of grow space uniformly when light is placed closer to the plants.

Also, if we take LCP of minimum 190 uMol into our consideration then it’s potential coverage lies at 1.5’ X 1.5’ of grow area but ideally 150 uMol on border of grow space is considered to be the enough of light for weed plants. 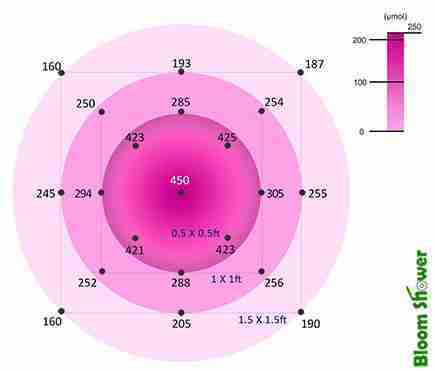 Moreover, LCP is the least required amount of density of light where plants could absorb required light for process of photosynthesis.

It’s not what you pay for buying an LED that define it’s cost. Yeah, it is the power consumption that justifies an LED’s worth as an economical product in reality.

Now, if we take power consumption of Mars Hydro 300W LED grow light into consideration then it takes on average 130W for its best performance.

Which comparatively lower than some of other brand’s which fall in same price range and with same PAR outputs.

Moreover, their light quality is a bit compromised while mars had kept it intact and still they’ve achieved this low power requirements. Upgraded product! You remember?

Talking about Cooling; this grow light is backed with a single heavy duty yet silently operating cooling fan. And, there’s a small ventilation holes available on the side bar of the panel from where heat keeps on dissipating on its own. 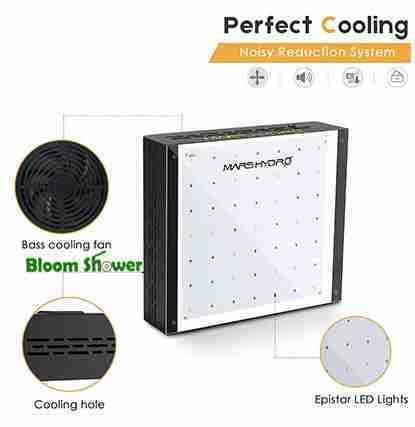 Now, if we talk about our personal experience then we ran this panel for around 10 hours constantly and things were remarkably stable and there was not traces of heat inside the grow space. So, yeah it works.

If you’re beginning an not sure whether you’ll keep hustling with the same grow zone or will expand it in future then this feature will be an added advantage for you. 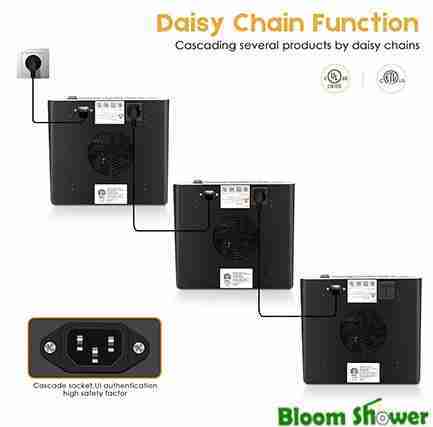 Yeah, with help of daisy chain port available on the backside of Mars Hydro 300W LED grow light one could connect an additional LED panel without any need for an additional power outlet.

People living in USA will be glad to know that mars hydro has their US based service center in California.

Yeah, it’s not an ordinary Chinese product where brand disappears once you buy their product.

Also, their support quality is amazing and they’re proves that a products success is solely dependent on what their customers think of them.

Moreover, we’d like to state it in this Mars Hydro 300W LED Grow Light review, that this product comes with 3 year’s manufacturer warranty where any technical issue will be resolved with least possible hassle.

As mentioned in the introduction of this post, this Mars Hydro 300W Review is intended to be unbiased, so, we’ll not hid some sore facts that people are not sharing just because they’re interested in making a sell.

Well, our experts have tested it personally and here’s some limelight on what they didn’t liked about Mars Hydro 300W LED Grow Light.

Firstly, People who’ve a bit of experience might be knowing that a panel with either reflector or optical lens is great when it comes to maximization of generated light.

Yeah, there’s no reflector or optical lens cover to back the mars hydro up in maximization and that’s the reason some people resist in going for this panel.

Moreover, in few cases we’ve observed that direct light penetration over canopy is a bit risky especially when a beginner is dealing with the LED grow light.

Also, there’s no mode swapping controls on Mars Hydro Eco 300W and that’s also one reason where it lacks user friendliness. However, it eases the use of the product as user is not supposed to worry about deciding when to turn light on which mode.

What Makes Mars Hydro 300 Watt LED Grow Light Worth To Have Choice?

The first best thing that we’d like mention in this Mars Hydro 300W Review is, its pricing.

Yeah, its one of the best affordable light available on the market with all ideal requirements on the place.

Moreover, the way it operates is also fabulous to observe. Yeah, no noise, no excessive heat, no worries of losing plants or panel.

It’s highly durable and reliable to use for longer term. So, a beginner could repeat the growing process even if unfortunately the person come across a failure due to mistakes on other part of indoor weed cultivation like proper supplements, nutritional parameter or environmental parameters.

Well, to give our readers a firm reason to make a wise call, we approached around 50 indoor gardener in our connections who’re using Mars Hydro 300W Full Spectrum LED Grow Light in their grow space.

Here’s two best response we got from our connections.

Jane from Detroit :- I’m not using it currently, but it was my first panel so I’d like to give you an idea about that light. Well, before starting my first indoor weed garden I was a bit skeptic about my basic knowledge and hence wanted to invest least possible amount in tools and props. Mars Hydro 300 helped me for around 4 harvest and then I replaced it as I was planning to expand it to next level. However, while using it there was no single reason to replace it as it’s perfect in almost all angles but I wanted a bit of testing abilities and that’s why upgraded to viparspectra Dimmable PAR900. Yeah, for starting out the growing journey nothing could be better than mars hydro 300W LED grow light.

Rosh from California :- Yes, I’ve used it in past. Probably 2 years back if I’m recalling it right. Well, I’d recommend that light to anyone who’s starting out because it helped me a lot in beginning and it could help you too. Best thing about it, is its ability to operate under less or moderate observation. Also, getting near to 1 oz yield in very first harvest isn’t bad quality of light I think.

In this video there’s a detailed Mars Hydro 300W Review provided for our readers.

Yes, mars hydro 300W Full spectrum LED grow light emits a complete 12 band spectrum which includes all vital band that are being observed in real sunlight. So, yeah it is fairly reliable and you could trust on it.

How many plants I could grow with a single Mars Hydro 300W LED?

Mars Eco 300 is capable of helping you in covering around 2’X2’ of grow area during blooming phase. Also, what level of density you want in your plant placement that plays a vital role.

So, around 2 plants with proper placement could be placed under a single Mars 300 LED panel.

Can I Rely on Durability of Mars Hydro 300W LED Grow Light?

Yes. Mars hydro is an established brand and their quality control is remarkable so you could rely on its durability without any doubt.

Well, that’s a premium feature added on high priced products. Moreover, it has nothing to do with plant’s growth and health so we’d say that if it’s there then it’s good but it’s not there then too it doesn’t make any difference.

Well, as mentioned repeatedly in this Mars Hydro 300W LED Review, if you’re just starting out in indoor cannabis cultivation and seeking a solid kick-start at low risk of investment then this one is good fit for you.

So, all in all we observed that if we keep premium features aside which are requirements of an intermediate or established indoor cultivator then it has almost all the features available in it. Yeah, features which we usually expect from an ideal full spectrum LED grow light.

YES! In our opinion, Mars Hydro 300W LED Grow Light is the best and affordable LED grow light available on the market for beginners.