Growing indoor is fun if you have some good quality tools in your sack to help you with.

Yeah, in this Mars Hydro 600W LED Grow Light Review, we’re going to talk all about this one of the highest demanding and greatly utilized grow light by mars hydro.

Ohh wait! If you’re thinking that in this article we’ll be only covering its features & will brag about the product then you’re “Wrong”.

Yeah, as we believe in providing in a completely non-biased and result focused review, in this article as well, we’ll be covering some of the negative sides found on this panel.

Also, it’s going to be a long and detailed review covering all aspects and sides of this panel so read it whole and pay proper attention on each of the details. 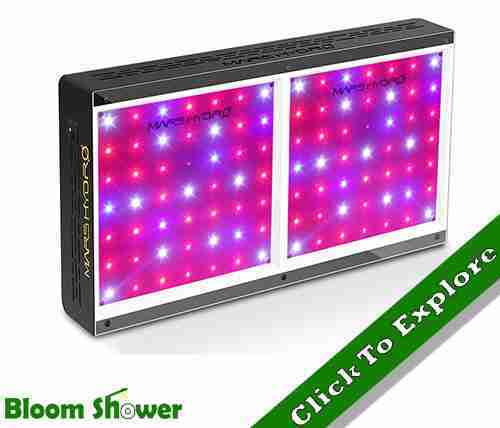 So, let’s get started with specification & details of the panel in this mars hydro 600W LED review.

Yeah, we though to provide you with a rough overview of this product with help of this specification table in this Mars 600W LED review. We hope you liked it!

So now, let’s move forward with features along with its plus & minus.

As mars is a well known brand and pretty much everyone is knowing enough about the brand, so we’ll proceed with rest of the details in this Mars 600W Review.

Yeah, why to waste time in unusual stuff that don’t matter?

Being straight to the point, most of our experts liked the design & panel quality.

However, very few among us is impressed with the light placement and board design.

Yeah, parts & materials used in the making of this Mars Hydro 600W Model is of top notch; and there’s no doubt in that.

But, PCB board where each of the diodes are placed to create the effect seems like old fashioned and ordinary.

Moreover, this light is comprised of 112 PCs of 5W LEDs which is equivalent to 560W, so, we are also feeling skeptical for the maths behind 600W figure marked on this panel & and its adverts. 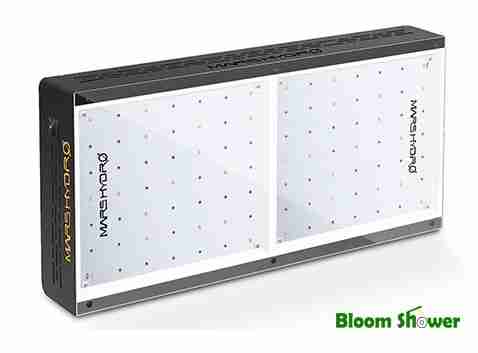 However, upon taking opinion from industry experts we found that light quality in terms of lumens output and PAR readings is more than ordinary 600W HPS or MH systems. And, that’s the reason behind labeling it as a 600W product.

Yeah, we’ve done PAR testing of this mars hydro 600W LED grow light and we’ll discuss about it in detail later in this review.

To conclude, we’ll give 8 out of 10 ratings to it for its build & design factor.

Yeah, I mean light is neither having optical lenses or reflector on it to maximize light effect; and, still we found actual light and brightness of fabulous quality.

Yeah, Mars Eco 600W features a complete full spectrum which has almost all bands and effects found in our true sunlight. 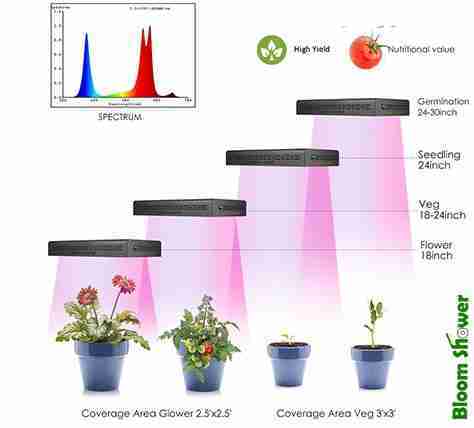 However, we tried to check for UV lights but it seems like it is not present; while we found 2 IR chips to be working in the center of both part of this LED Grow Light.

Now, if we talk about results then instead of testing it in a single grow space we collected results of around 10 people so that we could count a proper average amount to be expected.

Yeah, on average each member in our survey got around 3 to 4 oz. of yield using single LED for a single harvest.

However, results are dependent on multiple external & internal factors and hence may vary depending on it. So, we advice our readers to consider it for a rough guess only and don’t build any expectations out of it.

This 600W LED grow light by mars hydro is capable of covering around 2.5’ X 4’ of grow space due to its rectangular shape and reflector less panel design.

Moreover, each diode is placed at 90 degree of focusing angle so, all the light will be delivered directly towards your plant canopies. Yeah, near to none light loss.

Also, we found that various studies suggests that direct light boosts the light penetration and light will be pretty dense and plants will take a bite on it as soon as it’s being delivered on it.

We found in our tests that this Mars 600W LED grow light is capable of producing PAR or PPFD results of around 440-455 uMol from height of 18”. 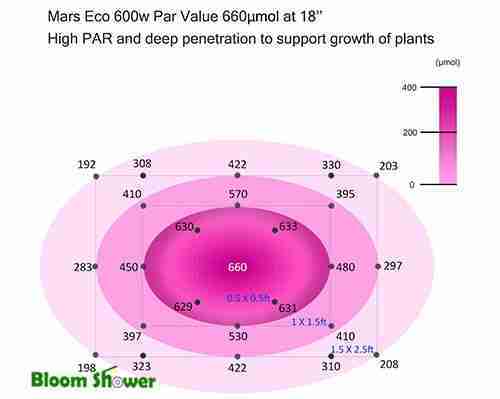 However, lumens output don’t really matter as it’s what’s being seen by human eyes and don’t have any connection with plant’s growth or health.

But yeah, PAR results are sole aspect behind measuring real worth of an LED panel; and, in this case we’ll say for the price it’s more than expected.

Also, depending on plant’s phase of lifecycle, growth rate and grow tent quality; you could increase or decrease the coverage caliber of this panel as PAR will remain pretty much same.

Yeah, a wise man won’t look at initial cost of a product and will focus more on to recurring cost that he has to pay while using a product.

Same in this case, if you’re here just because this grow light is pretty much cost effective in terms of initial pricing then you should read it carefully.

Well, actual power consumption depends on several external factors such as type of power output socket, input voltage to the panel and so on.

Hence, in this case as well, we ran a test among our connections of people who’re using this panel since a long time.

Yeah, we found that initially panel consumes on average 195W for its working.

Moreover, one user reported that after 2 year’s of constant usage with rest of 45 minutes after each 18 hours; his panel is consuming around 210W on average.

However, this is common among almost all brands that it suck a bit more power compared to initial days as it depends on quality of drivers & rest of technology.

Also, we’d like to mention one thing in this Mars Hydro 600W LED grow light review that, for the label of price, this is a minor change.

So, in case, you are planning to change your mind then also don’t forget to keep rest of benefits it offers into the mind.

Yeah, among all the other stuff we liked in this Mars Hydro 600W LED; we liked its cooling caliber and temperature sense the most.

This 600W LED panel is equipped with 2 high quality cooling fans and an advanced aluminium heat sink for the purpose of tremendous heat dissipation. 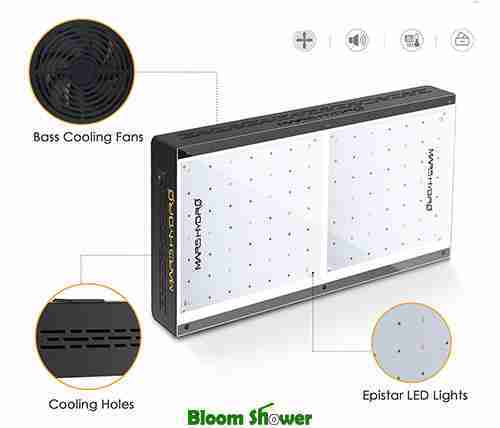 Moreover, entire cooling mechanism is operated with help of ECO Cooling system which is patented technology by Mars Hydro.

Also, upon testing it physically, we found that it runs with normal temperature for up to initial 6 hours and then its heat increases gradually. So, we would recommend to have a hold on each 12 hours of usage until panel don’t get stabilized to the room temperature.

Moreover, with a good quality and decent grow tent with optimal ventilation, this panel will work like magic.

Yeah, details we’re going to covered in this section has been rarely discussed about on internet or any traditional indoor growing or weed cultivation community or forum.

Firstly, panel features a single power button and there is no other additional functionality available as long as control is concerned.

Yeah, normally, having a dual mode switch or dimmer could add some advantage from comfort point of view. But, unfortunately for the price, this is what you could have.

Moreover, as mentioned earlier in this Mars 600W LED review, this grow light is focused for beginner indoor growers and hence it is equipped with Daisy chaining port. 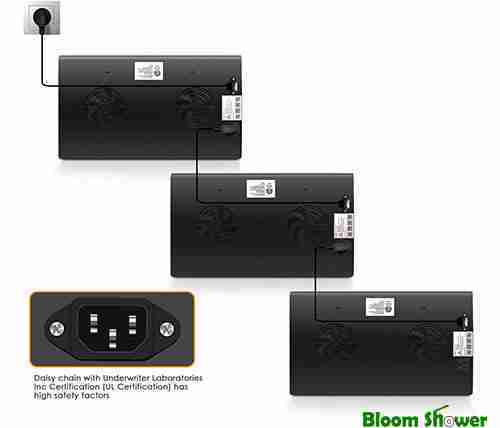 Yeah, daisy chaining port is a good additional as it provides freedom of expansion in grow area without trouble of an extra outlet for power supply.

And now, if we talk about safety standards then all products manufactured by the brand Mars Hydro is certified for various safety measurements which includes certification from ETL, CE & RoHS.

So yeah, not only you, but also your product is ensured to be safe for longer usage.

Moreover, this panel runs with an US 100V-240V AC power supply. And, generates frequency of around 50-60Hz.

Yeah, mars hydro is known for their user’s satisfaction and appraisals.

Also, If we talk about it in detail in this Mars Hydro 600W LED Review, then it may go infinite.

However, this user opinions and recommendations are more than enough to explain this brand’s caliber in terms of performance as well as user satisfaction.

Moreover, all products manufactured by Mars hydro comes with 3 years of limited warranty and 30 days satisfaction or return policy.

However, for warranty terms we’ll recommend our readers to check their policy in details for more information.

Yeah, as mentioned in the beginning of this Mars 600W LED Review, we’re not just going to cover plus of this product but we’ve also found some people who’ve changed their mind due to some reasons.

And, here’s their reasons. Firstly, panel is not equipped with any reflector panel or optical lenses and hence coverage might be compromised. Well, that’s one reason from one person.

We also, found another one with mention of daisy chaining. Yeah, one expert in our connection believes that daisy chaining increases power consumption and it is of no use if you’ve a fixed plan to execute.

Well, all mind are not same and it depends on personal planning so we advice our readers to decide accordingly. As, daisy has always two sides one is bright and one is dark; so check your surety and then go ahead with your decision making.

What Makes Mars Hydro 600W LED grow Light A Worth To Have Product?

Yeah, as earlier, we’ve already covered negative sides of this product and hence now we thought to include our opinion about positives in this Mars Hydro 600W Review.

Talking about positives, we liked its spectrum, density, and lower power pulling compared to other lights in this price segment.

Moreover, coverage is also decent and within our range of expectation for a product in this price segment.

And above all, we liked the cooling and entire temperature balancing mechanism that’s being included in this LED grow light by mars hydro.

What Existing User’s Are Talking About Mars Hydro 600W LED?

Well, we approached 50 people using Mars 600 model and got 48 replies.

Yeah, response was above our usual expectations. Moreover, response rate clearly clarifies that people are taking time to recommend this product so it has something called potential.

Go for it mate.

I liked it so much that now I can’t try other products out even if I want to.

As already being discussed in detail in this Mars Hydro 600W LED Grow Light review, we believe that our readers could make their decision on their own.

Yeah, just check your requirements and if you’ve any doubt about its performance or caliber then just be ensured it will amaze you with its results.

Just go for it. Have a great plants mate.