It won’t be wrong if I say, “To upgrade your indoor growing venture to new level, it is vital to cop up with new technology and upgraded tools.”

Yeah, in this Phlizon Newest 1200W LED Grow Light Review, we’re going to talk about one of such LED grow light by Phlizon.

Even after being a top rated and packed with latest technology this grow light has some drawbacks too and we’ll check it in a while.

So, along with its bright sides we’ll also discuss in detail regarding its negative sides in this article.

Yeah, it’s going to be a completely non-biased review instead of just bragging about positive part, so that our readers could make a non-regrettable decision as far as their goals are concerned.

And, if you’re looking for cheaper alternatives to Phlizon, you should check Our Article on Best Affordable LED Grow Lights 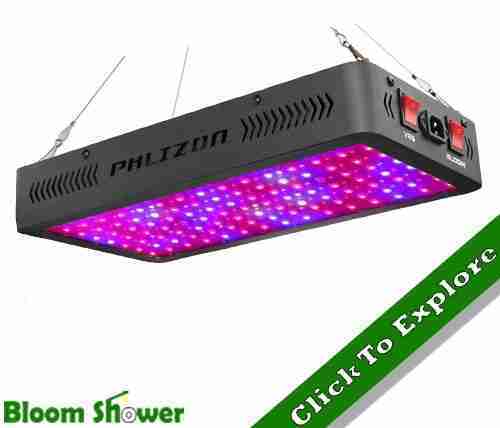 So, now you’re having all the details regarding this amazing light panel, hence we believe that looking at each individual characteristic will help you in deciding what’s good and what’s not for your plants.

And yeah, even if you’re new to this hobby and it’s your first time buying an LED then too don’t worry.

Yeah, as, we’re going to explain usage and purpose of each specification in with utmost detailing possible in this Phlizon Newest 1200W LED Grow Light Review.

Yeah, in this section we’ll talk in detail about all of the features and their purpose in an LED from plant’s growth perspective.

Yeah, as mentioned in specification part of this Phlizon 1200W LED Grow Light Review, it is not equipped with any reflector.

Basically, a reflector’s job is to maximize effect produced by each of the diode and to spread light evenly on the plant’s canopy.

But, in reflectors there is a danger associated with it. Yeah, as it stays in direct contact with diodes it could catch heat and after reaching to a definite level of around 80°C it could melt and catch fire.

So now, the question is, This LED is not featuring a reflector so how exactly it does the job of a reflector done?

Well, instead of including a reflector they’ve used optical lens cover on the panel which does the job in a perfect way.

Yeah, even after eliminating a reflector from its design its quality and light effectiveness isn’t compromised so it is a definite plus in this Phlizon 1200W LED.

Talking about numbers, Phlizon 1200W is equipped with 120 pcs of 10W LED chips. Moreover, these are not cheap diodes manufactured by some “never heard of” brands. 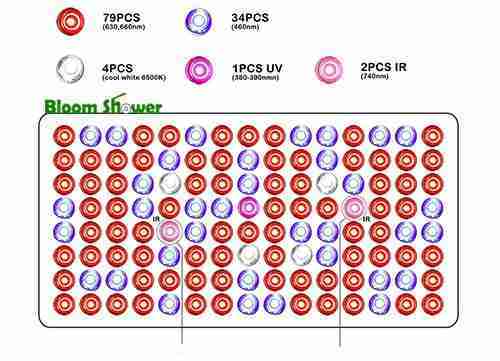 Yeah, these chips are manufactured by some well known brands like epistar and bridgelux.

Basically, in dual chip LEDs a single looking diode will comprise of two LEDs in it. Purpose of utilizing this mechanism is to maximize and centralize the lighting effect.

Yeah, this way more and direct light will be delivered towards plants which plays an essential role in higher growth rate and healthy sustainability as well.

Now, if we talk about placement of LEDs then Phlizon have used 90°& 120° placement combination to produce both evenly spread light as well as direct light.

Yeah, when it comes to plant’s requirements they only demand quality light which is equivalent to real sunlight.

Now, as in real sunlight there are 12 different kind of color bands found during researches and studies and these bands play key role in keeping process of photosynthesis active and improvised.

If we talk about whether phlizon 1200W LED grow light comprises these bands or not? Then, yeah, they’ve included combination of multiple shades in LEDs.

You can see these all things in below video.

Yeah, one could rely on it; as, it features a complete full spectrum light for plants.

So, as far as these two bands are concerned, Phlizon newest is equipped with 79 PCs of Red shade LEDs and on another hand it utilized 34 PCs of Blue shade diodes as well.

Yeah, both are not in equal amount as they don’t suppose to be. In basic terms, during vegetation plant requires Blue shade in less amount while during blooming they need denser and higher amount of Red shade for producing great buds.

Yeah, you heard it right.

Density is the amount of light provided to your plants and it is vital to know as far as growth and returns are concerned.

Firstly, manufacturer is claiming that this light’s LCP goes for up to 2ft of radius. Yeah, which means if we count from the point exactly beneath the light panel then effective light could be spread for around 4ft X 4ft of area.

Well, we’d also like to mention that according to our tests PAR readings from 24” height for center point is 530 uMol.

So, we’ll agree with manufacturer’s claim as long as effectiveness and coverable area is concerned.

Now, as we all know, during blooming our plants will require extremely dense and red colored light. So, it is recommended to you that you should place Phlizon 1200W LED grow light at height of 18” during blooming phase.

Yeah, it’ll reduce coverable area to some level, though you’ll still be able to cover around 3.5ft X 3.5ft of area with an ease.


Well, 1200W isn’t what it actually consumes. Yeah, that’s obvious because if it would be so then no one would even think of buying it in this era of cost savvy technology.

1200W is actually HPS replacement figures that indicates that you could replace an HPS or MH system which is sucking on average 1200W from your meter.

Anyway, if we talk about actual power pulling by Phlizon Newest 1200W LED Grow Light then it will consume on average 305W for best performance.

Yeah, above mentioned figure is for a situation when light will be operating to its fullest potential which means when Bloom and Veg both switches are ON.

Moreover, even after providing this level of quality and performance it won’t let you down as long as cooling and running is concerned.

Yeah, with 3 decently working cooling fans light keeps things under control for most of the time.

However, we experienced a bit of higher noise while it operates compared to other panels in this segment.

In the box, you’ll get one Phlizon 1200W Full Spectrum LED Grow Light.

Also, Phlizon will provide you one all-in-one parameter controller which will help you in keeping an eye on timing, temperature and humidity.

Moreover, common accessories such as hanging kit, user manual and warranty card is included in the box itself.

Yeah, we forget to mention that Phlizon provides 2 years warranty on their products along with 30 days satisfaction otherwise money back guarantee.

What Are Some Of The Shortcomings of Phlizon Newest 1200W Full Spectrum LED Grow Light?

Yeah, as promised, we’re going to cover all good and bad in this Phlizon Newest 1200W LED Grow Light Review.

So, now, if we look at fallback of this interesting panel then there are few which we noticed.

Firstly, we’re doubted about potential coverage caliber mentioned by brand. Because with a 1200W LED 2ft LCP isn’t expected usually. However, looking at PAR readings we got in our own tests helped us in resolving the doubt.

Also, speaking frankly, one of our reader told us that his product’s packaging was not in expected state.

Moreover, a bit noisy fan is not something that most of our own experts like; though they also states that as a beginner it won’t be a bad choice as far as plants and expectations regarding performance is concerned.

Also, apart from phlizon, there are many models available in 1000W-1200W power segment. If you’re interested then you can always check our following articles.

What People Are Saying as Phlizon Newest 1200W LED Review?

Here are some of the recent opinions from our readers who’re either using Phlizon 1200W LED or have just purchased it recently.

Fernando from Detroit :- I’m using this full spectrum LED grow light by Phlizon since last 6 months and I’m fairly satisfied with performance. As long as your question regarding what I liked the most in Phlizon newest 1200W LED is concerned, I’d say it’s effectiveness and low cost operations are key thing I liked in it. Yes! I’ll recommend fellow weed cultivators this panel by Phlizon.

Das from California :- I’ve just bought it last month. Reason I choose phlizon in the list of tons of other brands is these opinions of people and mainly pricing as it was following in my budget range. Yes, as all others are recommending this light; I’ll too recommend it.

Now, if talk about satisfaction rates and failure rates in this Phlizon Newest 1200W LED grow light review, then almost 85% people are satisfied with the product and only 15% people are standing with some issues in it.

Moreover, you could check this reviews where people have openely praised Phlizon 1200W LED for various reasons it deserves to be praised for.

Is It capable of producing good spectrum?

Yeah, our experts and team of experienced indoor cannabis cultivators has verified that plants beneath phlizon newest 1200W LED grow light are found to be tremendously grown and healthy.

Moreover, our tests for spectrum clearly indicates that almost all bands are available in its effect and can provide your plants with essential wavelengths to thrive.

How many plants I could grow under phlizon newest 1200W LED Grow light?

This light is recommended for 4-5 big sized cannabis plants.

What size of grow tent I should prefer for Phlizon newest 1200W LED?

Ideally, you could go with 3.5’ X 3.5’ X 6’ grow tent though you could go for 4’ X 4’ grow tent as well because we’ve found it to be working in it perfectly, provided grow tent’s reflection caliber is best on the market.

At what height I should hang Phlizon 1200W LED?

For quick answer to this question, kindly refer to our tips section as it varies depending on plant’s growth phase and timing as well.

Does Phlizon 1200W LED grow Light work for all phases of cannabis plants?

Yes! It works for all stages of plants as it comes with a complete full spectrum caliber and dual mode separate switches.

When to utilize daisy chain port in Phlizon newest 1200W? Is there any issue in utilizing it?

Well, as long as you’re using it for 3ft X 3ft of grow area, you won’t need any additional light. However, in case you plan to expand your coverage are then you could utilize daisy chain port for ease of usage.

Yes! There is one shortcoming of using daisy chain port. Usually, upon utilizing this port we found that power consumption of a panel increases to some level. However, it’s minor change only and there’s nothing to be panic about.

As we’ve tried to be as much as possible unbiased for this panel in this Phlizon newest 1200W LED review; we believe that by now our readers could make a wise decision.

However, if you’re still confused and want our opinion as an end note then we’d like to say that for quality, durability, reliability, performance and potential we’d definitely choose this LED as our starter panel if we’d be starting our growing journey with 3’X3’ grow area.

Yes, we’re recommending this grow light to everyone in case it falls under your affordability range. Yeah, because from results and performance’s angle there’s nothing to doubt about.

Go for it and have great plants buddy!