Investing in a good quality grow tent and in some high yielding seeds isn’t the end of the game; especially, when you’re expecting best returns from your marijuana plants.

Yeah, in this Viparspectra 1200W LED Grow Light Review, we’ll serve you with all essential details of it which are great from plant’s growth perspective.

Also, we aim to provide a completely unbiased review to our readers, so, there are some fallbacks of Viparspectra Reflector 1200W mentioned as well.

Moreover, we’ve reached out to hundreds of users by surveying method for taking their opinion regarding performance and potential of this LED grow light by Viparspectra, so, you’ll get some real experiences on the way before making a final call.

So, now, without wasting time; let’s move towards this Viparspectra V1200 LED review. 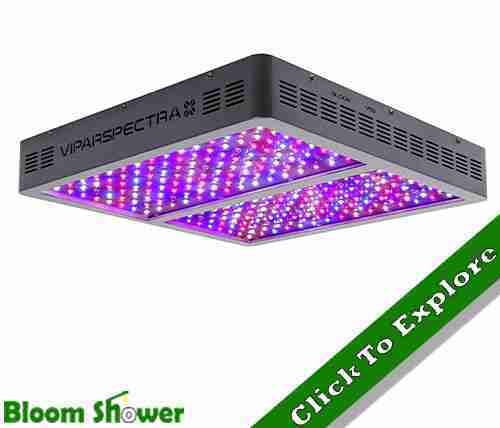 As stated in the introduction of this Viparspectra 1200W LED Review, we’ll start from the least concerned factors and slowly go towards most vital and essential parts of this LED grow light in this article.

So, let’s start with the product details and its technical qualification first.

Well, judging a book by its cover never serves you with the moral of the story, and same way one shouldn’t make any decision just by looking at the raw figures mentioned in previous section of this Viparspectra 1200W Review.

So, now, let’s dive deep into Viparspectra 1200W where we’ve explored and researched on all the essential pointers that are going to play an essential role in your decision making process.

Firstly, viparspectra is a brand based out in china. So, many people might think that Chinese products are cheap. Well, here your perception has been proven wrong by viparspectra.

Yeah, Viparspectra 1200W Features a  sturdy and solid build  and the design of this entire panel has been done both performance and durability in the mind. 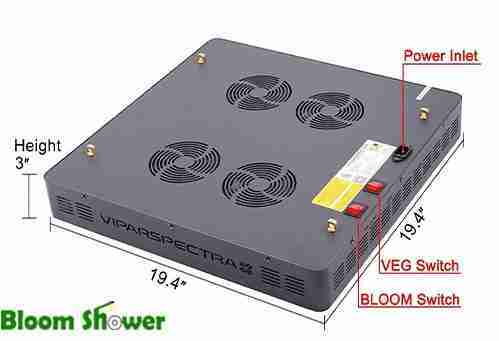 So, yeah, it is strong enough to rely when it comes to long term usage.

Also, we just loved the square shaped design because according to many expert’s square or circular design of a panel is good for even spreading of produced light compared to a rectangular shape.

We’ve seen many people asking “Can we use white light for raising indoor plants?”

Well, one could use white light but growth rate and yield won’t be as you might have expected.

And, that’s the reason why majority of indoor gardeners aim for a full spectrum light where all the vital wavelengths that are found in real sunlight are available.

Now, if we talk about spectrum in this viparspectra 1200W Review then it produces a full spectrum light.

Moreover, there are more than 12 bands are observed in its spectral graph. You can see all those band in below image.

And yeah, if you’re interested in knowing the available wavelengths of Viparspectra 1200W LED grow light then it includes  9 different wavelengths ranging between 440nm to 660nm for blending of Red & Blue light.

Moreover, IR at 730nm is also presend and for balancing mildness and for proper mixture white and light purple light at 3000K and 7500K respectively are present in viparspectra 1200W LED grow light.

Usually, plants need a specific amount of density in order to keep their growth process on track.

This specific amount of density could be measured using PAR or PPFD measurements.

As far as this Viparspectra 1200W LED Review is concerned, we’d like to state that this grow light is capable of  delivering 870 uMol  right in the center point of its placement. 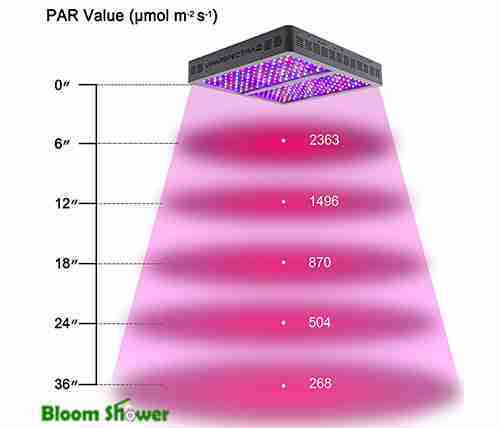 Moreover, quality light is being spread in the diameter of around 3.5’ where plants could get decently absorbable light to keep process of photosynthesis going.

Also, this grow light comes with two separate mode switches so you won’t be required to change its height frequently.

Ideal positioning of light should be at the height of 18”-24” which further depends on the plant’s current growth and health.

So yeah, for this ideal height placement one could achieve coverage for an area of around  3.5’X3.5′  during vegetation and during blooming if you place light closer to the plants then it reduces to  3’X3’ . 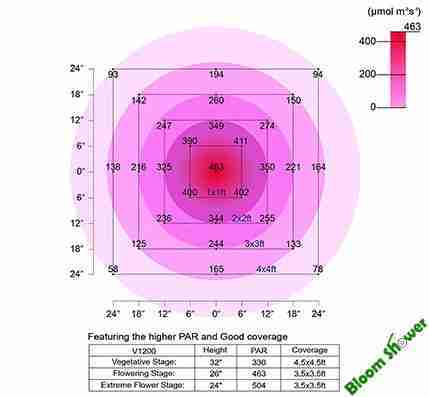 For a light priced under this price line this is not so great results, but yeah, this is ideal and acceptable results in terms of coverage for a light in this price range.

Well, a lights initial pricing don’t help in anyway to make a beneficial choice. Yeah, if a product is available to you for just 100 bucks and it is resulting into massive figures on your power meter then that’s definitely a bad choice.

So, what we found here in Viparspectra 1200W LED grow light’s case is that it sucks on  average 520W for delivering best results when both veg and mode switches are on ON mode.

Well, this is higher than its competitors like king plus and mars hydro. But, upon testing we found that those light’s PAR outputs are disappointing compared to what you get in this panel.

Moreover, growth rate is better in viparspectra compared to its competitor brands. So, to conclude it in this Viparspectra 1200W Review, we’ll say that if you’re expecting an energy efficient light and ready for extending overall growth timing then this won’t be an ideal fit.

Moreover, plant’s compatibility is also better in viparspectra 1200W so, if you could grow one more plant in it and achieve results 2 weeks earlier than others then this one is definitely not a bad choice.

Viparspectra is brand known for quality and their expertise in producing safe and eco friendly products.

Yeah, this product by viparspectra is certified by UL standardization and you could rely on its safety measures. 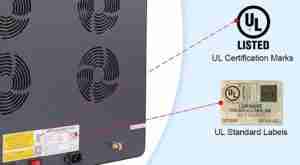 Moreover, it’s completely non-hazardous and eco friendly LED grow light where all environmental factors has been taken into utmost consideration.

So, one could only control this panel with help of  mode controllers available  on the product.

Also, we’d like to state it here in this Viparspectra 1200W review that as it’s a high end product with large coverage potential you might not require a daisy port as long as you’re planning to grow in a 4’X4’ grow tent.

Cooling being an essential factor from plant’s safety point of view, we pay utmost attention on a product’s cooling abilities.

So, Viparspectra V1200 1200W Full Spectrum LED features  4 highly reliable and stunningly working cooling fans  on the backside of panel from where they dissipate the excessive heat produced inside the panel body.

Also, a scientifically designed advanced aluminium heat sink is equipped on the panel to keep heat dissipation on track.

Our experts tested this grow light for 10 hours constant usage and temperature inside grow space as well as on the panel was remarkably stable.

Yeah, a bit of heat is ideal but it just won’t your plant canopies and that’s what matters.

However, one of our connection who’ve used it in past reported that after a year’s usage its fans will start making a bit of noise and one might require to deal with it.

However, we’ve verified that their return rates are very low due to the quality of light this product delivers to its user’s plants.

Also, their support team is very friendly, humble and kind; so, you should expect quick response to your concerns from their side.

As we stated in the beginning of Viparspectra 1200W LED Grow Light Review, our opinion regarding this full spectrum LED grow light is going to be completely unbiased. And, that’s the reason we’re not intending on telling you the dark sides of this LED grow light in this review.

Well, there are mainly two things that we didn’t liked about this grow light.

Firstly, Viparspectra 1200W LED’s power pulling is a bit more compared to others as already stated. Well, from quality perspective this light is great but still more than 500W electricity is not just ideal and could result in higher cost in long term.

And second thing that we didn’t like about V1200 model is the report we got from our friend ken regarding noisy behaviour after a year’s working.

However, apart from these 2 facts, we liked almost everything in viparspectra 1200W model.

What Makes Viparspectra 1200 Watt LED Grow Light Worth To Have Choice?

If you’re asking for two topmost reasons to go for this light in this viparspectra 1200W review, then all we’d like to mention is its build quality and performance.

Yeah, we agree that it’s not so great in performance when it comes to power pulling but if you look at average yield results that we’ve verified among 100’s of users then that’s best among all in its competition.

Yeah, all the panels in its competition are averaging 4-6 oz. of yield while it takes that figure to almost double.

Secondly, we liked dual switching mechanism. Yeah, nowadays many panel are eliminating this feature and I personally don’t like it when I come across absence of it in an LED grow light.

It’s eases the process of phase shifting and also eliminates hassle of back and forth height changes.

Here are two shortest responses we got.

Ken from Beaverton :-  Apart from a bit noisy fans after 1 years usage, I like almost everything in this LED grow light. Yeah, if you’re thinking of your plant’s only then this one is best bet. But, you’ll have to tackle with the noise.

Check Out Other Viparspectra Review,

Have a question? Check this first, who knows if yours is already included!

Yes. You could rely on the quality of spectrum provided by Viparspectra. We’ve checked the spectral graph in our test and we’ve found that almost all bands available in sunlight are available in it except UV.

How many plants I could grow with a single Viparspectra 1200W LED?

As many as you could accommodate in a 3.5’X3.5′ grow space. Yeah, suggesting a fixed number of plants isn’t justifiable as different strains and plant breeds of weed requires different positioning and density.

As stated earlier in this Viparspectra 1200W Review, ideally you could use it for a 4’X4’ of grow tent with top reflection and least possible light leakage.

Can I Rely on Durability of Viparspectra 1200W LED Grow Light?

Yes you can, afterall they’re known for affordable quality.

Is there any better alternative to viparspectra?

From price perspective? Yes. King Plus and Phlizon 1200W are two best alternative to V1200. However, they’re not capable of delivering similar or close quality of light if you expect that.

As everything was explained in detail, we don’t think that you need our opinion in this Viparspectra 1200W LED Grow Light Review.

Yeah, you got your answer.

Also, our experts suggests that going for viparspectra 1200W would be a best bet for someone who’s a bit of experience and is capable enough of observing plants and making decisions accordingly.

Yeah, it’s an intermediate level of cultivator’s grow light and we don’t recommend it to someone who’re taking their first steps in the growing journey.